We're working on our site. Don't be alarmed if things are temporarily out of place. Our new design should be completed shortly. Thank you!
The 29th Rare Plant Conference was February 25-27, 2020
sponsored by the Idaho Native Plant Society
led by co-chairs: Anne Halford and Jennifer Miller
Theme: Conservation in Idaho and Beyond
Featured rare plant: CYPRIPEDIUM PARVIFLORUM VAR. PUBESCENS 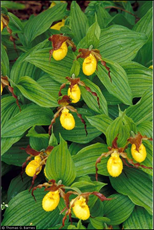 The Idaho Rare Plant Conference (RPC) is generally held every other year, and is organized by INPS along with various agencies (such as Bureau of Land Management, Idaho Department of Fish and Game, US Fish and Wildlife Service, Forest Service, etc.), academics, consultants, and others interested in Idaho’s rare plants.

It is an opportunity to learn about rare plants, share information, and network with others of similar interests.

Updating the INPS Rare Plant List, based on new information, is a substantial portion of the RPC. In addition, there are usually a number of talks/presentations on rare plants, conservation issues, or related topics. Dinners (either banquet or informal gatherings) along with conference breaks and poster session offer opportunities to renew or make new botanical acquaintances. Sometimes a field trip has been part of the RPC.

Past Conferences and Keynote Speakers